Here’s Part 2, the second half, of a sampling of the ones I’ve met along the way the first week of my travels around the country, in just the first 2,000 miles or so.

(Remember, follow my Facebook page for more of a daily recap, since I use it to fill in the blanks between posts with my latest informal phone pics and random thoughts.) 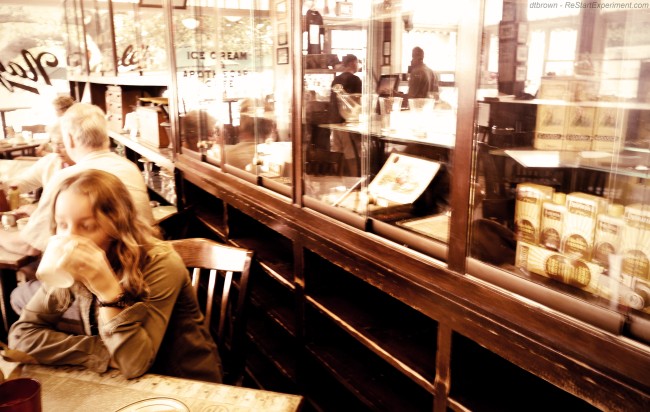 ^ I met Stephanie in the jungle in Costa Rica. She was volunteering at a nearby school, and we both share surfing as a passion. I was grateful for her hosting me in her Bradley Beach apartment and showing me around the cool old north Jersey beach dives, like Nagle’s Apothecary and Ice Cream Shop, which has been around forever. I was especially glad to be able to actually use the surfboard I packed on top of my camper. We had a blast in the ankle-slapper Atlantic ripples. But Steph didn’t have to stay in touch with some random dude she met in the jungle, but she did, and she has become a wonderful friend. We chose to maintain connection, and I think we all need to do that more with each other. 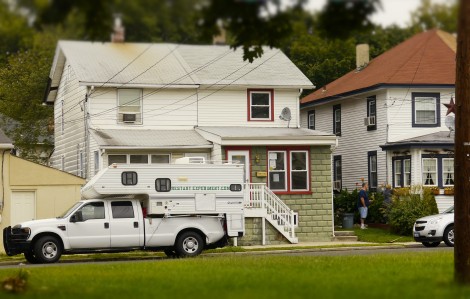 ^ Grandmom’s neighbors. Chuck and Linda and Dan and his son. I drove up to my grandmother’s house, which I hadn’t seen in at least 15 years, and they happened to be doing yardwork outside and Dan was taking his boy to his grandmother’s house. We didn’t know each other, so I explained my trip. But even before I started explaining, as soon as they found out who I was, they started going on about my grandmother. Before my grandmother passed away in 2005 (at 101 years old), Linda would get her groceries and Chuck would help take care of her bushes. “Your Grandmom taught me a lot,” said Chuck. “Like, don’t get too attached to your home and other stuff. You can’t take none of it with you. Just live simply.” My grandmother spoke from experience, as she was a borderline hoarder, who kept everything. I think after so many years, she realized that no matter how hard we try to hold onto the past, we still have to confront the present, and move on with our lives. With tears held just beneath the surface, we all shared stories of Grandmom’s impact on our lives, and enjoyed the miracle of strangers bonding instantly. Thank you, Grandmom. 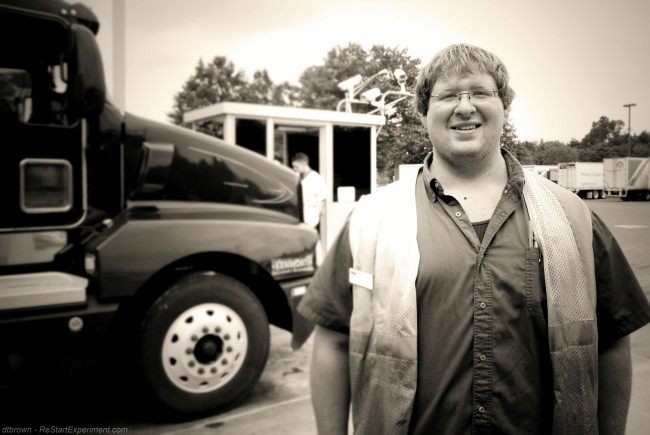 ^ Tyler helped fill my tank at his service rest area on the turnpike. He asked about my triquetra tattoo, and we ended up conversing about the mystical in life. He shared his belief that it’s all about the power of our minds merging with the power of the universe. I added my hunch that magical things can happen when our individual decisions align with the random intelligence of the universe. Tyler is just one of the millions of examples of how we are more than our jobs. Although each of us become significant to others in small and large ways through our work – like Tyler’s impact on my writing – The work we happen to do to pay the bills does not define our significance. We are more than the work we do.

^ Often it’s the random stops that turn out to be some of the most interesting and profound ones. Jonathan and Gina in Albany touched on this for me. Jonathan drove by me on the NY thruway, looked up my site, contacted me, and bought me lunch in Albany. Like some others have said, he said what I’m doing is inspiring to him. Things like that are nice to hear, and I do hope this crazy thing I’m doing affects more than just me and maybe inspires people to go a little further than their comfort zone. But people like Johnathan inspire me. He’s been through a lot in life, and has decided that he is back in the driver’s seat now. I look forward to seeing him take the risk and go where his desire wants to take him. 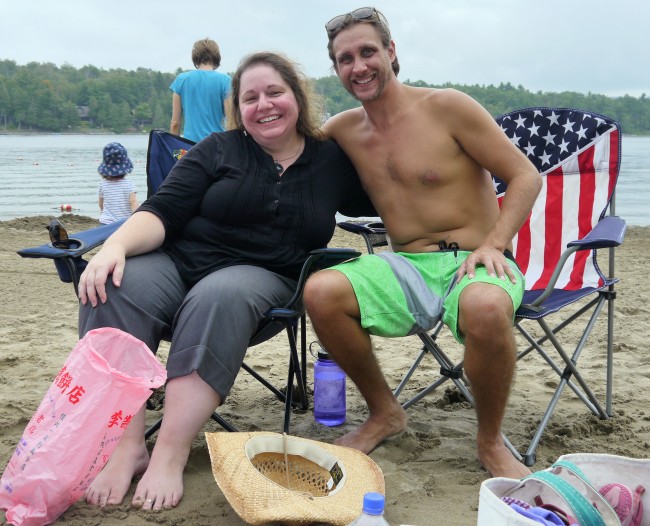 ^ Gina has been following my blog, and reached out and offered to host me along my way. She’s also a fellow writer/editor. We didn’t know each other from Adam, and her friends called a few times to check on her after I arrived, just to make sure I wasn’t a psychotic mass-murderer. She’s got good friends. Gina cooked me amazing, healthful food and always made sure I had everything I needed. If you’re into good food, you must check out Gina’s blog, GoodLittleCook.  And it was a special treat to join a picnic at Thomspon Lake park in upstate New York’s mountains, with her foodie friends from the co-op she’s been involved with. But one great thing about spending time with Gina was our conversations. She asked wonderfully simple question like, “Ok, so the tagline of your blog mentions, ‘Living the life we want. So…What is the life you want?” It was good to have to articulate my desired life, out loud, to someone, even a near-stranger.

As I’ve made the initial legs of this exploration, I’ve of course thought a lot about where I’m headed. It’s one thing to think about something, and another thing to verbally, specifically describe what you want, and still quite another to see it play out. Each time I’ve stopped so far, with each of those I’ve highlighted above discussed the basics of what I’m doing. It’s started to get to elevator-pitch status. Which is fine. But there’s always a deeper thread running underneath. A thread of self-evaluation. Examining the emotional, psychological, spiritual, occupational, and practical aspects of such a journey. It’s a microcosm for life really. This is what I am examining. Not necessarily that tired human question of the meaning of life, but the various questions of living as a modern human.

I could go on about all the idiosyncrasies of living at this very point in human history. But what it really comes down to is this: Right now, we are living in the pinnacle of human civilization. This life is our one opportunity to direct the course of ourselves as individuals, our families and communities, and our species. So…Where do we want to go? Where are we willing to go? Where will we allow ourselves to go?

If we don’t address such questions, sure, life and evolution and the universe will continue moving, without us. But I’d rather say I wasn’t just along for the ride. And I believe that all of us are in the driver’s seat. So let’s take this where we want to go.